On January 6, 2015, the Board of Regents of the University System of Georgia voted to approve the consolidation of Kennesaw State University (KSU) and Southern Polytechnic State University (SPSU). The new mission statement (Appendix A) emphasizes KSU’s values, stating:

The work of consolidation requires that mission, purpose, and processes be examined at every level so that the emerging institution is comprised of the best of both institutions with student success front and center. This work is recognized in the first goal of the 2015-16 KSU Consolidated Strategic Plan which is to “Transform two distinct educational institutions into one student-centered comprehensive university.” Although a combined student profile can be generated for the newly consolidated Kennesaw State University, the consolidation is not an additive process. A new KSU, having reaffirmed its commitments to being student-centered and to its students’ success, awaits the fall 2015 class.

For reporting purposes and when possible, historical institutional data are combined. Although concurrent enrollment did occur between KSU and SPSU, a National Student Clearinghouse report on concurrent enrollment for fall 2012 undergraduates revealed that the two institutions only shared 18 students for that term. No adjustments were made to any of the combined data under the assumption that there were equally small numbers of shared undergraduate students for the other fall terms. Additional enrollment data for the newly consolidated KSU as well as pre-consolidation data for each institution are detailed in Appendix B.

The gender ratio for the combined fall 2014 first-time freshmen cohort is very different from previous years. As shown in Table 1, the combined first-time freshmen profile is 47% female and 53% male. This is not simply an artifact of the predominantly male SPSU campus. The Kennesaw Campus was consistently 41% male from fall 2010 to fall 2013 with actual counts ranging from 1,233 to 1,317 students. In fall 2014, there were 1,674 male students comprising 45% of the incoming first-time freshmen, over 300 more male students than in previous years. There was a 2% increase at the Marietta Campus – or an additional 107 male students. Students associated with KSU’s new football team and marching band as well as the addition of the predominantly male Marietta Campus shifted the gender proportions for incoming freshmen.

Prior to being reclassified as a comprehensive university, KSU was one of thirteen state universities as was SPSU.  For the fall 2006 cohort, the 4-year graduation rate for the Kennesaw Campus, 14%, was slightly below the USG average of 15% whereas the Marietta Campus was less than half at 7%. The 6-year rate for the Kennesaw Campus was 4% higher than the USG 6-year rate and the Marietta Campus was 1% below the average. More detail on graduation rates can be found in Appendix D.

As noted in the enrollment description, fall 2014 showed a marked shift in the composition of the incoming first-time, full-time freshmen. Graduation rates for males tend to be lower than those of females. For example, the fall 2007 cohort graduation rates of males versus females for eighteen USG institutions (25,571 students) revealed a 10% difference in the 4-year rate and an 8% difference in the 6-year rate (see Table 4). Changes in the composition of the student population will be monitored to ensure that appropriate support services are devised and implemented as well as for their potential effect on RPG metrics.

The number of bachelor’s degrees conferred for both campuses is shown in Figure 1. More detail is available in Appendix E regarding the characteristics of graduates. 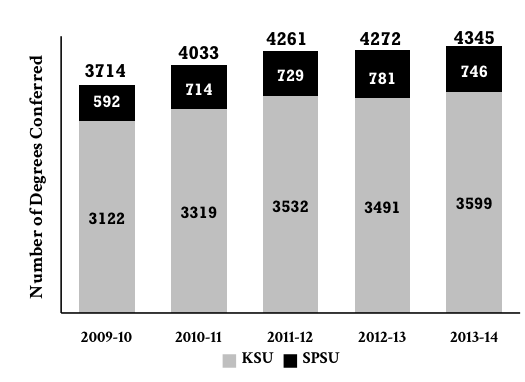 The main goal of the Complete College Georgia (CCG) initiative is to increase the number of undergraduate degrees awarded. This goal is elaborated in the KSU Consolidated Strategic Plan: “Improve recruitment, retention, progression, and graduation rates (RRPG) in accord with Complete College Georgia by enhancing the quality, breadth, and relevance of academic programs so graduates are prepared for work and life.”

As stated previously, increasing degrees awarded is the overarching goal so that graduates are prepared for work and life. It is expected that the more articulated goals – advising, dual enrollment/PLA, remediation, and instructional delivery – will contribute to increased degrees awarded “on-time” without excess credits.

The additional strategies for student success come from both the Kennesaw Campus and the Marietta Campus. Both institutions supported a Dual Enrollment Honors Program (DEHP) and it is anticipated that there will be over 450 students participating in the program for fall 2015 (http://www.kennesaw.edu/honors/dehp/). For students who would benefit from additional support for the transition from high-school to college, there is the Bridge 2 Success (B2S) program. The Bridge 2 Success program (http://uc.kennesaw.edu/programs/b2s.php) is a six-week summer access program for first-time, full-time traditional-aged freshmen. For older students, portfolio-based prior learning assessments (PLA) provide the opportunity for students to translate their work experience into college credit. Students of all ages will benefit from stretch-format and a co-requisite approach to remediation rather than the traditional non-credit remedial courses. Guided Pathways to Success (GPS) should reduce excess credits by providing students a clear roadmap to their desired degree. KSU has also partnered with Ruffalo Noel-Levitz in developing a Strategic Enrollment Plan to help refine recruitment and retention strategies.

The consolidation of Kennesaw State University and Southern Polytechnic University provided both institutions an opportunity to bring successful strategies to the table and discuss challenges they faced.  The business of consolidation is time-consuming as there are many decisions to be made as well as plans that have to be formulated and executed. However, as stated in the mission and evidenced in the Consolidated Strategic Plan, it was clear that student success and being student-centered were of the utmost importance to the new KSU.

In recognition of the need to provide guidance, form, and accountability for RPG initiatives, a new Senior Vice-Provost (SVP) was hired in July 2015. The SVP is responsible for RPG initiatives and has already formed a Student Success Team to identify and address barriers to student success.