In fall 2015, the new KSU welcomed its first fall class to the Kennesaw and Marietta campuses. Over the past year, many of the ideas to enhance student success that were generated over the course of the consolidation with the expert input of the administration, staff, and faculty have been set into motion. The fall 2016 enrollment represents a 7.7% increase over the combined enrollments for KSU and SPSU in fall 2014. Retention and progression rates are increasing – KSU students are thriving. Retention, progression, and graduation (RPG) has become the item of premier importance across the institution and is becoming the driving force for determining budget priorities.

In fall 2016, KSU enrolled 35,018 students, a 5.3% increase over fall 2015. KSU has the second largest beginning freshmen enrollment in the USG and both the percent and number have steadily increased over the last 5 years. In the 2015 CCG report, the change in the gender ratio for fall 2014 first-time freshman was noted. The fall 2016 overall enrollment gender ratio has changed with women making up less than half of enrollment. This makes Kennesaw one of two USG institutions with a majority male enrollment. Additional enrollment information is available in Appendix A. 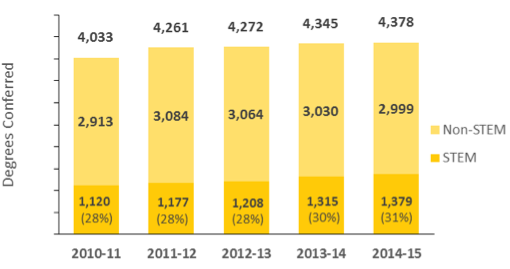 Although the number of degrees awarded to all students has increased, the graduation rate for first-time, full-time students decreased for KSU for the three fall cohorts from 2007-2009. As detailed in Table 3, USG comprehensive universities and the USG as a whole showed a similar decline for these years. Additional detail on graduation rates is available in Appendix C.

In examining data like these, we can look at the relationship between retention and graduation. We believe that the retention programs described in KSU’s Complete College Georgia plan are contributing to the rise in retention rates. This year’s report shows KSU’s progress as a world-class university committed to student success. 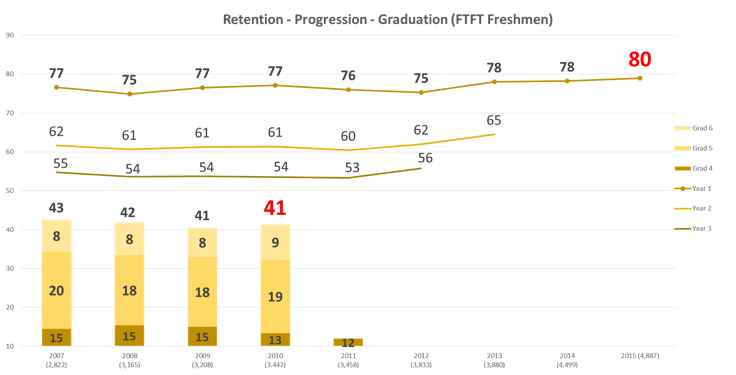 Over the past year, our CCG initiatives grew to keep pace with a comprehensive university and it became clear that our CCG reporting had not captured the scope of the retention, progression, and graduation (RPG) work being planned and implemented on both campuses. There are RPG initiatives in every college, in many departments in Student Affairs, and in the operational units providing indirect services and support to our students. An expanded CCG committee was created to complete an inventory of programs and initiatives, discuss points of intersection and opportunities for synergy, review associated metrics, and create content for a CCG website currently under construction.

For this 2016 report, there are four broad categories that will be addressed. These are: 1) Advising, 2) DFW Rates, 3) Predictive Analytics, and 4) Beyond Financial Aid.